Why did Palaeolithic people emigrate 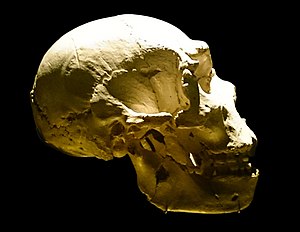 Archaeologists have to find out how people lived in the Stone Age on the basis of finds.

The Stone Age is the oldest phase in human history. This time is divided even further: at the beginning the Paleolithic and then the Neolithic. Some scientists still put the Mesolithic in between. Others mention the Copper Age at the very end. The Stone Age was followed by the Bronze Age, then the Iron Age.

An archaeologist came up with the term Stone Age in 1836. The term is Greek and means "The speech from the beginning". It is very difficult to differentiate between the different time periods. Nowadays one tries to fix each time period to certain inventions. But inventions such as the wheel or the processing of copper never happened suddenly. They slowly crept in, spread from place to place, and eventually got out of hand.

How did the Stone Age begin? 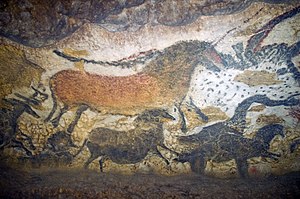 Only traces of the oldest people have been found, for example these paintings in the famous Lascaux cave in France.

The Stone Age began about two and a half million years ago with the appearance of the genus "Homo". Several species emerged from the homo. One of them was Homo Erectus, which means “the upright man”. Homo sapiens developed from him. Except for Homo sapiens, all branches of Homo are extinct. Homo Sapiens means something like “wise man” or “knowing man”. He originally lived in Africa. All people living in the world today are homo sapiens.

The body of Homo Sapiens looks different than that of other people like the Neanderthals. The Homo Sapiens people used tools and made them themselves. This differentiated humans from animals. Few of them use tools: usually stones or sticks are found in nature.

It is difficult today to find out when and how people emigrated from Africa. It was a long time before they reached what is now Europe. Judging by the archaeological finds, humans first appeared in Spain around a million years ago, and in what is now Central Europe around 600,000 years ago. The Stone Age began first in Africa, then in Spain and only last in Central Europe. 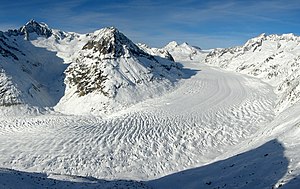 A glacier is a huge piece of ice in the landscape. This is what the Aletsch Glacier looks like in Switzerland today. There was a lot more of this in the Paleolithic Age.

The Paleolithic was an ice age. On average it was about as cold as we were only in winter. Many areas were covered by glaciers, for example large parts of today's Switzerland. The ice-free areas were like a tundra: this is a landscape with grasses, bushes and small trees.

There weren't that many species of animals. Only those who were well adapted to the cold could live here. The most common big game was the mammoth. It was a relative of the elephant. Around the end of the Paleolithic it became increasingly rare and eventually died out. The researchers don't know if it just became extinct because it couldn't adapt to new climates. Perhaps humans hunted the mammoth too hard and thus exterminated it.

How did people live in the Paleolithic?

The hand ax was the most important tool in the Paleolithic.

The oldest tool known to man was the hand ax. People knocked hand axes of various sizes out of flint stones. Silex is very hard and occurs naturally in the form of balls. With hand axes, people could dig, punch holes in wood and much more. They could use smaller pieces as a knife for cutting or use them to scrape the fat off animal hides.

Dealing with fire was very important. Fried or cooked food is much easier to digest. It becomes more nutritious and gives more. In the beginning, people probably couldn't start a fire themselves, but found it in nature, for example after a lightning strike. Then they guarded it, so they didn't let it go out. The oldest fireplace in Europe, about which researchers agree and are certain, is in England. It is around 400,000 years old.

The fire opened up even more possibilities: people could heat their homes and were therefore less dependent on the climate and the seasons. They could light their homes and work at night. Fire also deterred wild animals. Spearheads can also be hardened in fire. Birch pitch began to flow over the fire. They could use that as glue.

People lived as hunters and gatherers. So they fed on killed animals and protected themselves with their skins against cold and rain. They collected berries, fruits and roots that they found in nature. These people were hardly sedentary: they moved around, mostly following the herds of animals or where it was best for the time of year. So they were actually nomads.

The glaciers left such hills in the landscape.

In the Neolithic Age, the earth warmed up. The glaciers receded more and more. They left moraines behind, long hills made of rubble. The expert can still recognize them in the landscape today. The lakes on the edge of the Alps were formed where glaciers used to be.

The tundras became loose forests. Reindeer and wild horses began to spread. Later the deer, the red deer, the elk and the wild boar, the bear and the wolf joined them. All of them provided humans not only with meat for food, but also with skins for clothing. There were more fish in the warmer waters that humans also caught and ate.

How did people live in the Neolithic Age?

Neolithic ceramics. The patterns were imprinted with cords, which is why this culture is called "corded ceramics".

The Neolithic is called the Neolithic in technical terms. The Greek word "neo" means "young". The Neolithic Age began in Central Europe around 10,000 years before Christ. Even this transition did not take place at the same time everywhere.

People became more and more animal breeders instead of hunting animals. They used wild animals to live tethered or in a fenced pasture. This process is called "domestication". This is how pets came about. Humans domesticated wild sheep, cattle, pigs, chickens and many others. Today's dogs are domesticated wolves.

People also found grasses with seeds that they could eat. Instead of leaving everything to chance, they began to store and re-sow the largest seeds of each. Today's grains such as wheat, oats, barley, rye and others developed from sweet grasses. This was linked to the fact that they gave up their nomadic life more and more and settled in small villages. So people went from gatherers to farmers.

Another important invention was ceramics. Presumably, people found out by accident that clay hardens in a fire. They formed vessels out of clay, burned them in the fire and were thus able to store and transport supplies. Ceramic vessels are very important for archaeologists today. You can tell to which people a settlement belonged and in which time the ceramics were made.

How did the stone age end? 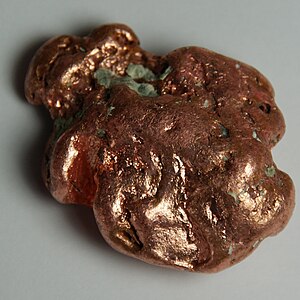 A copper nugget that can sometimes be found.

Even during the Stone Age, people found gold and silver in their pure form, i.e. as nuggets, i.e. naggets. They mainly used it to make jewelry. They discovered copper towards the end of the Neolithic Age. Copper was harder than gold or silver. Therefore knives or scrapers could be made from it. Some scientists call this time the "Copper Age".

The next discovery was bronze. This is a mixture of a lot of copper and a little tin. Scientists now believe that humans found an ore that contained this mixture.

Even during the Stone Age, there were traders who moved from one place to another with carts or loads on their backs and exchanged their goods. Now they also took bronze with them to trade with. This is how bronze spread across Europe. More and more bronze workshops emerged. That was the transition to the Bronze Age.