What is the Porter's Five Forces model

The industry structure analysis is used to determine the attractiveness of an industry. For this purpose, the five components of the industry structure ("Five Forces") are analyzed and evaluated: the bargaining power of the suppliers, the bargaining power of the customers, the threat from new competitors, the threat from replacement products and the intensity of competition in the industry.

The basis of Porter's model is the approach of industrial economics. He assumes that the attractiveness of an industry for a company operating in it is determined by the market structure, as this influences the behavior of market participants. To determine the industry's attractiveness, the following five components of the industry structure, the so-called "Five Forces", must be examined:

Each of the five components is to be assessed for the present as well as for the future, e.g. on the basis of a utility value analysis. An evaluation can look like this: 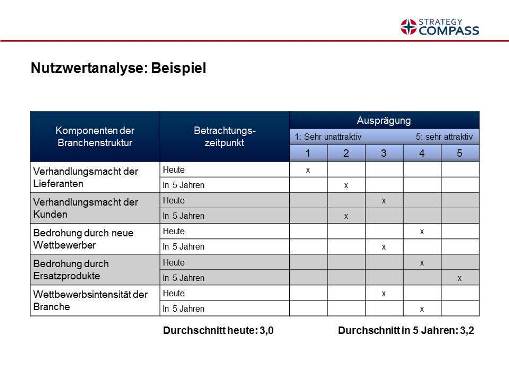 The five components are described in detail below.

Indicators that suppliers have a high level of negotiating power

As with suppliers, the bargaining power of the buyers determines how much they can assert their interests in a business relationship with the company. A high level of bargaining power on the part of customers will usually mean that they can either ask for lower prices or obtain better quality at the same price. Such behavior has a negative effect on the company's profit prospects, which is why an industry is all the more attractive, the less bargaining power the customers have.

Typical barriers to market entry are

Substitute products are understood to mean substitutes in the broader sense, i.e. products that meet similar customer needs, but are currently perceived differently by customers, address other customer groups or are sold in other regions. Such replacement products have a negative impact on the attractiveness of an industry, as customers could switch to these products if necessary.

Are factors influencing the threat from substitute products

Intensity of competition in the industry

The following diagram summarizes the five components of the industry structure.

Michael E. Porter, the author of the approach himself, explains the system of the "5 Forces" and how it can be used in practice in an interview with Tom Stuart, the managing director of Harvard Business Review.

The original article by Michael E. Porter that first explains the approach.

An Analysis of the Impact of the Internet on Competition in the Banking Industry, using Porter's Five Forces Model

The article provides an application example of industry structure analysis. It examines the influence of the Internet on competition in the banking sector.

Use the slides shown above for your application.