Have you ever cloned a pet? 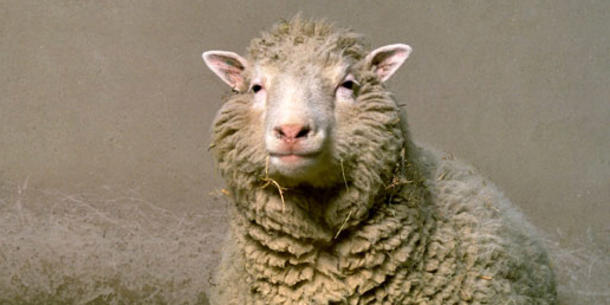 As early as 1901, the German biologist Hans Spemann accidentally cloned the first animal, a newt. Almost a century later, in 1996, Dolly the sheep was born. This event brought cloning into the limelight. Soon afterwards, genetically identical copies of other farm animals were reported. The pictures of the first cloned pets went around the world. A plant for the mass production of cloned animals has been under construction in China since 2016.

Clones, named after the Greek word for branch, are genetically identical organisms that were created through asexual reproduction. There are many examples of this in nature: protozoa such as bacteria and yeast multiply by dividing into two. Sponges reproduce by constricting parts of the organism, also known as budding. Many plant species such as strawberries or potatoes reproduce through side shoots and thereby clone themselves.

Cloned cattle. In the northern Chinese port city of Tianjin, the mass production of cloned animals is imminent. The Company Boyalife announced the production of initially 100,000 cattle embryos annually, which is to be increased to up to a million animals. The cattle are said to provide five percent of the meat consumed in China each year. 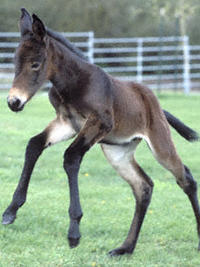 The mule Idaho Gem is the first cloned equine animal. Today it is mainly expensive sport horses that are cloned.
Photo: University of Idaho / Phil Schofield

In animals, clones have long been generated with the help of embryonic stem cells. These cells still have their original ability to develop (totipotency). This means that they can transform into any type of cell in an individual since all of the genes are still active. In practice, after the first steps of division, the fertilized egg cell is divided into several identical cells that can develop into a complete organism. In this way a multiple birth is artificially created. The offspring are among each other, but not identical to the parents.

The clone sheep Dolly: a sensation for the scientific world

The clone sheep Dolly was born in July 1996 and caused quite a stir. Dolly was the first mammal to be cloned not from an embryonic stem cell but from an already differentiated, adult (somatic) cell - a sensation for the scientific world. Because normally an adult cell does not have the ability to develop into different tissues by dividing and multiplying.

The researchers of the RoslinInstitute in Scotland treated an udder cell of an adult sheep in a special way in order to restore the original viability. They multiplied the cell on a nutrient medium. Then they chose a cell from it. They put these in a new nutrient solution that contained just enough nutrients to keep the cell alive. The “starving” body cell then switched off all genes that were still active and entered a state of rest.

At the same time, an egg cell was taken from another sheep and the nucleus, i.e. the genetic information, was removed. The egg cell was also in an inactive state at this point in time. The egg and body cells were then brought together and an electrical impulse caused the cells to fuse. The newly formed cell then began to divide and develop into an embryo. This procedure is called somatic nuclear transfer or, after the institute involved, the “Roslin technique”.

After a few days, the cloned embryo was implanted in a test tube in the uterus of a third sheep, the surrogate mother, and carried to term normally. It took nearly three hundred attempts and over ten years for scientists to create a viable animal. Dolly is genetically identical to the sheep that donated the body cell - that is, a twin.

But even if the clone researchers spoke of a great success, there were still many questions unanswered. It soon turned out that Dolly's genome was similar to that of old animals and that the sheep therefore had a shorter lifespan. In February 2003, Dolly was euthanized at the age of six due to severe lung disease. She also suffered from arthritis and overweight. Sheep usually live to be eleven to twelve years old. However, the researchers do not attribute the lung disease to the fact that Dolly was a clone. Now the stuffed clone sheep is the attraction in Scottish Royal Museum in Edinburgh.

The sheep Dolly was followed by a large number of cloning attempts with different animal species, which however often failed. In the meantime these difficulties seem to have been overcome. In China and the USA there are even signs of commercial use of cloning technology.

In 2001 saw the first cloned cat CC The Light of the World. It is after the abbreviation for Carbon copy, the English word for punch. Three years later, according to media reports in the USA, the first clone cat is said to have gone over the counter. The first cloned dog followed in April 2005.

Today you can work at the company in South Korea Sooam Biotech have their dog cloned for $ 100,000, companies in the US offer dog and cat cloning. There are research projects that aim to preserve endangered animal species for posterity through cloning. In Vietnam, for example, at the end of 2006 it was possible to clone an endangered wild boar species.

Cloning for agriculture and human consumption

In January 2008, the US Food and Drug Administration (FDA, Food and Drug Administration) Products from cloned cows, pigs and goats considered safe for human and animal consumption and approved for sale. Meat and milk from cloned animals and their offspring are just as safe and harmless for nutrition as traditionally bred animals. Due to a lack of information, other cloned animals such as sheep were not allowed.

However, it is very unlikely that products from cloned animals will actually go on sale, as the animals are mainly used for breeding. The Company Trans Ova Genetics for example, gives birth to around 100 cloned calves each year and also clones pigs, goats, sheep and horses. The animals are used exclusively for breeding purposes. It can be assumed that the offspring of these clones are distributed all over the world. It is almost impossible to trace the origin of these animals.

Research and development into cloning farm animals continues in many countries. A few institutions in the EU are also researching animal cloning. In Europe, however, the sale of cloned farm animals and their products, as well as their import, are to be banned. The use of offspring and breeding material from cloned animals should also not be allowed.