How is Christmas in Japan

Buddhism and Shintoism shape festivals and holidays in Japan. Christians, on the other hand, make up about 1% of the population. But in our globalized world, trade also spreads customs and traditions and Santa Claus has certainly been imported into Japanese department stores. Nevertheless, Christmas is still not a big issue in Japan: although schoolchildren and students have two weeks of vacation, more because of the turn of the year, which is traditionally the most important festive event in the course of the year. Even companies and shops often close from December 30th to January 3rd!

Nevertheless, one is also active in Japan during the "Advent season":
It is important to give friends, relatives, neighbors and everyone to whom one owes something a "year-end gift" (o-seibo). In companies and associations they celebrate an "annual celebration", the bônenkai.

December 24th is a completely normal working day in Japan, only young families celebrate a small party with gifts and cake for their children in the evening or the next day. Young couples go out for a fancy meal on Christmas Eve, popular restaurants are fully booked weeks in advance.

Preparations for this are in full swing at the end of the year: Everyone is returning to their families, Tokyo seems to be deserted at times. In all houses there is a major cleaning (susuharai = Soot sweeping) before the house entrances are decorated with pine branches, straw bunches and rice cakes.

One makes a pilgrimage to the temples, where shortly before midnight in the Buddhist temples the joya-no-kane (New Year's Eve bells) literally ring out the old year. With the fading of the 108 bells (for the 108 passions that people have to overcome to achieve enlightenment) the new day begins. On this first temple or shrine visit of the year, the hatsumôde, young and old pray for a healthy and prosperous year. The trains run all night.

The next morning will o-zôni eaten, a soup with sticky rice dumplings. The feast for the whole family was prepared the day before: o-sixi ryôri consists of traditional dishes such as boiled fish, beans, pickled vegetables and fish (su-no-mono), and is served nicely arranged in a black lacquer box. 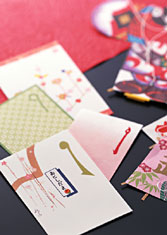 On 1.1. will also be the nengajôwho have favourited New Year's greeting cards. All with the note nengajô Postcards were held back and collected at post offices throughout December so as not to deliver the New Year's greetings prematurely.

Only the 1.1. (ganjitsu - New Year's Day) is a national holiday, o-shôgatsu (New Year) means at least the first three days of January.
The children often pull out the traditional toys again: e.g. spinning top (coma) and the Japanese shuttlecock (hanetsuki) with brightly painted wooden clubs, or they fly kites. They can also find out about o-toshidama happy to receive a monetary gift from parents or relatives.