This article is out of date, but remains for historical reasons.
There is (yet) no current article.

The Block library is a collection of new blocks for Scratch, BYOB and Panther. You can find them in the Scratch forum under the category Advanced Topics. At the moment you can find 370 blocks there, some of which are also downloadable. Below is a quote from YourLocalBlockLib translated into German:

"Welcome to your block library! One of the most important and beloved features of scratch are the blocks, and a great deal of time and effort has gone into making the blocks you see. When building Scratch, the team specifically designed the code so that it would be as easy as possible to add new blocks, and many people have done just that! This topic aims to bring together a collection of useful block code for experimenting Scratchers to try out and learn from, embracing the program and share parts of the Scratch Motto and hopefully letting users use what they learn here to imagine their own blocks!"

in "ITopic: Welcome to your local block library!" of YourLocalBlockLib(March 2011)

→ Welcome to the Block library! One of the most important and popular features of Scratch is the blocks and it was very time consuming and tedious to create the blocks you see. When Scratch was developed, the idea was to make the code so simple that you could easily add new blocks, and that's exactly what a lot of Scratchers did! This topic is intended to combine many new and useful blocks in one place in order to encourage scratchers to experiment and learn from them, to share the scratch motto with others and, last but not least, to let other scratchers use their blocks so that they too get the taste of programming your own blocks!

History of the Block Library 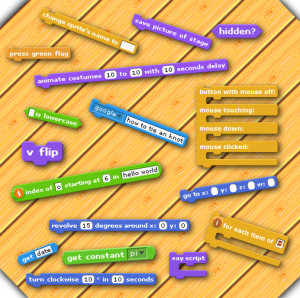 Collage from blocks of the Block library

The first forum post for Block library was born on July 15, 2010 by the Scratcher Sparks released. He came up with the idea that Block library because in the past there was a lot of asking for new blocks for Scratch, so he came up with all of these blocks together with a nice layout. At the beginning there was Block library still empty, but over time many blocks have been created and shared with others through the library. Everything went well, until Sparks became less and less concerned with them over time Block library because he was challenged outside of Scratch. To combat this problem, the scratcher suggested SSBBM plan to create a user account that can be accessed by multiple moderators who are responsible for the Block library To take care of. These moderators were SSBBM, Scimonster, TheSuccessor, Pecola 1 and MeowMeow55.

In July 2011, the Block library its own website based on ScratchR.org is hosted.

On September 15, 2011 there was TheSuccessor his moderator position because he no longer has time for it. He took his place Greenatic.

Structure of the block library

Since the website of the Block library is not yet completed, the blocks are currently still made available in your forum thread. It consists of several linked posts, each of which represents a category. Below is a diagram of the most important areas of the Block library:

So that Block library can grow, every scratcher is allowed to use blocks for Scratch, BYOB and Panther create and share in the library. Here you get the information how it works:

If you want to propose a new block for Scratch, answer the thread of the Block library and include the following data:

If you want to propose a new block for BYOB, answer the thread of the Block library and include the following data:

If you want to propose a new block for Panther, answer the thread of the Block library and include the following data:

When you get a block out of the Block library to add to Scratch, BYOB, or Panther, you can find help here. Since complete instructions for Scratch and Panther would go beyond the scope of this article, further posts in the Scratch forum are linked: