How can I improve organic chemistry

The two phases do not always willingly separate from each other after shaking. Sometimes there is also an emulsion: 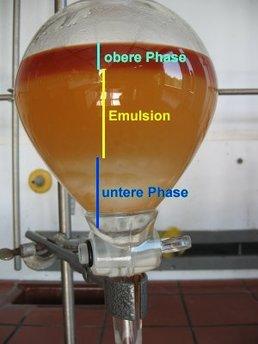 Emulsions can occur not only when you have an emulsifying component in your mixture, but also when the difference in density between the two phases is very small. It can be very stressful for you, e.g. if the dissolved substance is sensitive to hydrolysis and should be washed 'just quickly' with water. You then literally watch the product spoil in your hands.

The salt breaks the emulsion and at the same time makes the aqueous phase significantly heavier.

The following is a situation in which the two phases are actually equally difficult. They do not separate into upper and lower phases, but 'somehow' in the middle of the separating funnel and in between there are still a few 'Jupiter moons'. 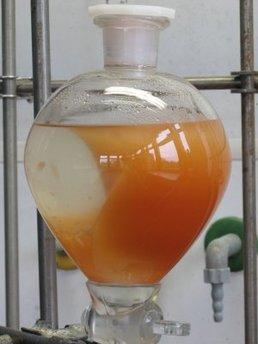 Here, too, simply change the weight ratio again - the easiest way is with salt.

Can the salt also have disadvantages?

The addition of salt can reduce the solubility of the aqueous phase for other substances (salting out effect). Depending on the specific situation, this is either support or hindrance for the desired purpose. If the aqueous phase is the upper phase, the addition of salt initially makes it heavier and therefore more similar to the organic phase, which can worsen the problem. On the contrary, it may be that diluting with water, i.e. making the aqueous phase lighter, is the better alternative. Normally only halogen-free solvents are used in the internship, all of which are lighter than water. The case that the aqueous phase is at the bottom and the organic phase is at the top is therefore much more common in the internship.