Why is whiskey the water of life

Whiskey - the water of life

After we made our 13th graduation trip to Stirling, Scotland, where we visited a whiskey distillery, among other things, I found a new taste: whiskey. Nothing works for a nice scotch in the evening, and I was surprised at how many people think about it as much as I do. In fact, many people prefer to have a whiskey rather than a beer in the evening.
But be careful: you shouldn't get drunk with whiskey, as this could be very expensive fun. So whiskey is for connoisseurs and not for weekend alcoholics.

What kind of whiskeys are there?
How whiskey is made
TIP
Whiskey links

What kind of whiskeys are there?

There are two well-known types of whiskey: on the one hand the Scottish whiskey, the scotch, and the American, the bourbon whiskey.

But there are also differences with scotch: there are malt whiskeys, which are made from the fermented mash of sprouted barley and come from the Scottish Highlands. If a whiskey has the title "Single highland malt"is allowed to carry, it means that his barley can only come from a growing area of ​​one vintage. This is what distinguishes a good malt.
Grain whiskeys, which are mainly made from corn, come from the Scottish Lowlands. The scotch is a mixture of the malt and grain whiskeys.
The Irish also make their whiskey, which is made exclusively from barley and distilled three times.
And of course what the Europeans do, the Americans also have to try: they mainly produce their bourbon whiskeys from corn, which, in my opinion, don't taste that good. But since they are produced in much larger quantities than the Scottish whiskeys, they are much cheaper to buy from us.
Canadians also make their whiskey, which mostly comes from the east of the country. However, they are only produced in smaller quantities, which is why they are only hard to come by in Germany.

All whiskeys have in common that they have about 43-45% alcohol. They do not get their typical brown color immediately, but only after years of storage in the barrels. In addition to the water, the choice of wood is also decisive for the color and taste of the whiskey. Since whiskeys are stored in the barrels for up to 26 years and so some are older than me, you can imagine why a bottle is so expensive.

The term "whiskey"comes from the Gaelic and simply means water there. Later the Scots also called their whiskey" aqua vitae "(or something like that; my former Latin teacher would now kill me), which means something like" the water of the Life "

Using the example of Glenturret whiskey, I would like to explain to you how whiskey is made. 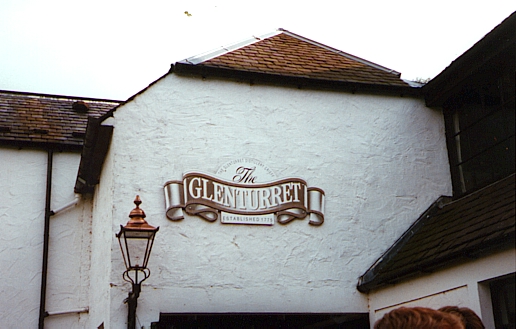 About the history of the Glenturret:
The whiskey display on the banks of the Turret Burn dates back to 1717. Glenturret was founded in 1775 and is one of the oldest Scottish single malt Scotch whiskey distilleries.
The distillery was initially operated by smugglers who chose this place near a hill because it served well as an observation post. In 1823 distilling was legalized in Scotland.

Malting:
The Glenturret Whiskey is made from Scottish, malted barley. This is one of the three ingredients, along with yeast and water, that are needed to make whiskey.
First, the barley is soaked in water for 2-3 days and spread over the malting floor, where it begins to germinate within 6-7 days. At this stage it is called the green malt. The green malt is then placed in a peat oven to dry and stop the germination process. The peat smoke contributes to the characteristic taste of the whiskey.

Mills:
The mill grinds the malted barley into grist. The three ingredients used are 20% husk, 70% grist and 10% flour.

Mixing:
The malt grist is mixed with three different amounts of hot water at a very high temperature. The brandy, which is also called wort, slowly seeps off through a filter base. The wort then passes through the heat exchanger, where it is brought to a temperature that allows fermentation. The pomace, the grain that is left over, is used as fodder.

Ferment:
The wort flows into the wash basins, which are made from different woods depending on each distillery. A special yeast is mixed in, which is then used to make a creamy porridge. The formula for this pulp depends on the distillery and is kept just as secret by them as the formula for making Coca Cola. A head of foam is created, which is called a bear. The wort ferments for about 48 hours and produces a fermented mash with about 7-8% alcohol.

Distillation:
The fermented mash is distilled in the washing still at around 95 ° C. The resulting distillate is collected and passed as a spirit into the tasting safe, the "Spirit Safe", where the distiller controls the flow of the spirit.

The "Spirit Safe":
All alcohol that comes from the distillation plants must be kept under lock and key, as it has yet to be taxed. The tasting safe allows the distiller to test temperature and specific gravity (strength) using a hydrometer in a test container.
The spirit from the spirit still (second distillation) is divided into three parts. Only the middle cut, which makes up only a small proportion of the total spirit, has the desired strength and quality. The remaining parts are returned to the spirit kettle and distilled again.

Storage:
The appropriate part of the spirit is then poured into the whiskey barrels, in which it is then stored for up to 25 years. When the spirit is bottled, it still has an alcohol content of 75%. By adding water, the alcohol content is reduced to 64%. The whiskey is still clear when it is bottled. It only gets its typical color when it is stored in the barrels. By law, the whiskey must be stored for three years before it can be sold.

TIP Finally: try your scotch with a little water. On the one hand, the water reduces the alcohol content and it is said that the water would make the taste of the whiskey even more intense.

Maybe I could give you a taste for it. If you are even more interested in the topic, you can continue surfing here: