How are biofilms formed

The interface on which the biofilm forms is called the substratum.

The vast majority of microorganisms live in nature in the form of biofilms. From a technical point of view, biofilms can have positive and negative effects. The biofilm is considered beneficial for the self-cleaning of water. Negative effects follow if biofilms cause material destruction (biogenic corrosion), for example. 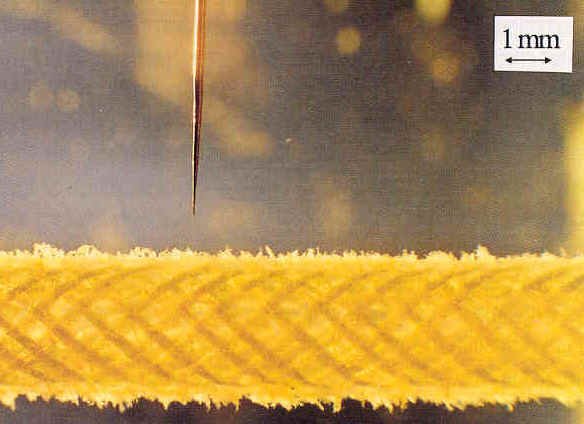 Needle electrode measurement on a membrane populated with biofilm, IUV

Biofilms grow in very different ways. In some cases, dense and closed biofilms with a relatively flat interface with the overflowing fluid are formed. The interface can, however, also be very irregularly shaped if, for example, bacterial species grow in the form of threads (filamentous) into the fluid or if the substratum is populated with protozoa (e.g. bells) or higher organism species. The flow conditions around the biofilm play an influential role here.

Biofilm formation begins when a cell attaches itself to an interface and multiplies there. Different mechanisms can be responsible for the adhesion of the cells to the interface. Van der Waals' forces, electrostatic attraction and hydrogen bonds are particularly important. Ultimately, every interface offers adhesion potential for microorganisms. In many cases, however, the bond is favored if the interface is already covered with organic polymers (e.g. polysaccharides). Such polymers are usually of biological origin. They originate from the mucous membrane that forms around bacterial cells, is occasionally completely or partially detached and is adsorptively bound when it comes into contact with interfaces.

As a result of the proliferation of cells that have attached to a surface, the organisms spread. The interface is first populated over a large area in the form of a film (biofilm). At the same time or later, the biofilms grow in multiple layers and finally form three-dimensional structures with more or less sharp boundaries to the phases (solid, liquid, gaseous) adjacent to the biofilm. The resulting biofilm matrix can be closed, but it can also be interspersed with pores, caverns and passages. The latter is mainly observed in the early stages of biofilm development.

The organism cells in the biofilm are mostly embedded in a slimy matrix made of extracellular polymeric substances (EPS). In many cases, a transition situation arises towards the interface. This applies in particular to the "biofilm-water" interface. In the core area, the biofilm is compact (basic biofilm). The edge area, on the other hand, is often very blurred (surface biofilm). Microorganisms grow into the liquid phase (e.g. bacteria growing in the form of threads, bell animals, etc.), and "valleys" and "heights" are formed.

The basic biofilm contains several solid phases (bacterial cells, EPS, inorganic particles), a liquid phase (water) including the substances dissolved in it (e.g. substrates) and occasionally also a gas phase (e.g. gas bubbles enriched with, among others) Nitrogen, carbon dioxide, methane, hydrogen sulfide). The solid phases are immobile with a few exceptions (e.g. worms). The water contained in the pores of the EPS stagnates. Substances that are dissolved in the liquid phase can therefore only spread through diffusive substance transport processes. Convective material transport processes occur within the basic biofilm in caverns and tunnels if these are traversed by the water.

On the surface of biofilms overflowing with water, a wall shear stress develops, the magnitude of which depends on the flow conditions in the water body (bulk) is determined. The resulting shear forces cause microorganisms to be torn out of the biofilm and transported away. This process is known as erosion. The shear forces increase when the cross-section through which the flow passes is narrowed due to the growth of the biofilm and the flow velocity is increased as a result. As the erosion rate increases, the thickness of biofilms is limited. In addition, the depth of the biofilm is determined by the detachment of fouling (sloughing) limited. Whole parts of the biofilm become detached if the biofilm becomes too heavy due to increasing thickness, if long-lasting deficiency situations (e.g. lack of substrate or oxygen) occur in the deeper layers of the biofilm, or if gas bubbles form in the biofilm (e.g. lack of oxygen). B. by denitrification) and thereby the cohesion of biofilm parts is lost.

In the area of ​​the surface biofilm, diffusive material transport processes in the closed biofilm protuberances are decisive. Otherwise, convective transport processes can be significant. The latter is particularly to be assumed if the movement of the outgrowths protruding into the flow (e.g. filamentous bacteria) triggers mixing processes.

To calculate the development of biofilm systems and the achieved metabolic performance, the spatial extent of the biofilm, the spatial distribution of the different types of organisms in the biofilm, the local distribution density of the individual species, the diffusive material transport processes, the reaction kinetic properties of the microorganisms involved, as well as erosion and fouling must be taken into account.

It should be noted that the substance concentration (e.g. substrate concentration) as it is perceived by the organism cells and must be used to calculate the reaction rate, must not be calculated from the ratio of substance mass and biofilm volume. Rather, the volume to which the substance mass is related is only obtained after subtracting all solid phases of the biofilm. Figuratively speaking: only the volume that can be squeezed out of the sponge "biofilm" may be used.

Source: [Script for the lecture on water quality management at the Technical University of Munich]

Use of biofilms in wastewater technology

Biofilm processes are particularly suitable for decentralized wastewater treatment, as the microorganisms are bound to a surface and are therefore not discharged from the biology even with high hydraulic loads.

Biofilms with their branched structure provide a very large adsorption surface, which means that cargo peaks are well retained, as substances that cannot be processed immediately are attached to the biofilm to a certain extent and then broken down in periods with little food intake.

The microorganism populations tend to grow rapidly, which, without limitation, could lead to clogging of the growth areas. The growing biomass (excess sludge) must therefore be detached from the settlement surface (fixed bed) and discharged from the biological reactor. These requirements can only be met to a limited extent with conventional biofilm systems (e.g. trickling filters, submerged discs), especially when the system is overloaded.