What is meant by immobilizer

Immobilizers are devices on motor vehicles that are intended to prevent them from being put into operation without authorization. 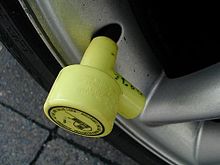 The so-called Valve guard causes the air of the tires to escape completely after 200 m to 500 m when driving off. This immobilizer is used by city administrations and regulatory agencies to ask customers who are in default to pay (e.g. vehicle tax, warning fines). However, critics argue that the valve monitor can be a hazard if it is not noticed or the warning attached to the vehicle has been removed, as an empty tire makes it difficult to control the vehicle and can lead to accidents. The major disadvantage of the valve monitor, however, is in particular the possibility of making it inoperable by driving slowly. In order to open the valve, the valve monitor needs a sufficiently strong centrifugal force, but this is only reached from around 15 km / h. So you can continue to move a vehicle locked with a valve guard by driving at walking pace. Furthermore, the valve guard does not prevent the driver from changing the wheel. Many city administrations that have been using the valve monitor for a long time consider this approach to have failed due to the high number of losses. Since around 2005 the trend has been towards parking claws (wheel claws), which make it impossible to move the vehicle and also to change the tires. For such purposes, wheel clamps are sometimes used, which are clamped and locked over the wheels by the police.

In most cases, the term immobilizer refers to the legally required electronic immobilizer. Since January 1, 1998, all newly registered cars in Germany must be equipped with an immobilizer. Insurance companies had already requested immobilizers and associated deductions in the event of theft, as car thefts increased rapidly, especially after the eastern borders were opened.

The immobilizer is activated automatically when the ignition is switched off. In order to put them out of operation again when the ignition is switched on, an RFID chip is usually used. Individual car manufacturers also use key rings with galvanic contacts or a numeric keypad with a PIN code. Ultimately, passive RFID transponders have become generally accepted in the key. 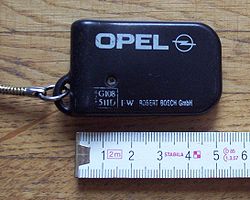 The first immobilizer models from around 1991 and retrofit systems worked in most cases according to the so-called "three-circle interruption". This usually interrupts via relays:

The three-circuit break offers only moderate protection and is easy for thieves to overcome, since only the relays have to be bridged again. However, this takes so much time that amateur thieves are deterred.

More modern immobilizers (starting around 1994) no longer work with the three-circuit interruption, but give the engine control unit a release via electronic communication, without which the engine will not start. This communication mostly takes place via the vehicle bus system (today mostly the CAN bus) and is more or less strongly encrypted.

The RFID chips used in the keys are simple in most cases Read only-Transponders, as they are also used to identify animals and which only send a fixed serial number cyclically in plain text, or rewritable transponders to which an identification number can be assigned.

The immobilizer itself can be an independent control unit or it can be integrated into another, in the majority of vehicles in the instrument cluster or the on-board computer.

The race between car thieves and car manufacturers will probably continue and the systems for theft protection will have to be further developed. The following should be emphasized:

In addition to electronic components, immobilizer systems also contain hard-wired software and can represent business secrets. Therefore, under certain conditions, the possession and use of devices with which such systems can be overcome is punishable under Section 17UWG or Section 263aStGB.

In the fourth generation of the immobilizer, electronic chips are integrated in the key or in the speedometer. This chip contains a digital key without which the car cannot be started. An algorithm checks the correctness of the key. The vehicle can only be started if it is correctly identified.

Carrying a device to overcome electronic immobilizers can be a criminal offense.[1]