Is it okay to fight people

Darya Safai cannot be forbidden to speak. "If you look at the laws in force in Iran and the way women are treated in the country, then you have to say: there is actually nothing right there." Women in Iran are disadvantaged in practically all areas of life. That makes the 40-year-old, petite woman angry. That is why she has been campaigning for more equality in her home country for years.

But: She fights her fight from exile. Escape from Iran was the only way for them to escape prison. "My life was in danger, so I had to get out of there." In 1999, Darya Safai and her husband were among the main organizers of student protests at Tehran University. At that time, the budding dentist was in her final year of study. When the government cracked down on the demonstrations, she was arrested. Her husband managed to escape to Turkey. Safai was in solitary confinement for 24 days. Then she was released temporarily. Before the trial began, she used her chance to flee across the border into the neighboring country like her husband. From there the couple went on to Belgium. The two have lived there since 2000, working as dentists. In absentia, Darya Safai was later sentenced by a court to two years in prison.

The Ghavami case draws international attention to the stadium ban 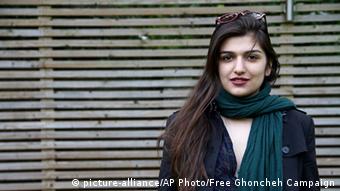 Ghoncheh Ghavami was also sent to prison. The student with a British and Iranian passport wanted to attend a men's volleyball international match in Tehran in June 2014. But this has been officially banned since 2012, just as football stadiums have been taboo for women since the Iranian Revolution - when men play there. For her attempt, Ghavami ended up in the notorious Evin Prison. Accusation: propaganda against the state. The case made international headlines, criticizing the actions of the Iranian authorities. In November, the student, who was sentenced to one year in prison, was released on bail. She left Iran immediately. She is no longer allowed to enter Iran for two years.

In the course of the Ghavami case, the World Volleyball Federation FIVB imposed sanctions on Iran. The country should no longer be allowed to host competitions as long as women are not allowed in the volleyball hall. But this has not yet arrived in practice. In June 2015, women were again prevented from entering the sports facility during a World League game against the USA. And just two weeks ago it became clear once again that Iran was not keeping to the agreement: women were denied entry to a beach volleyball tournament on the Iranian island of Kisch. In the run-up to the event, the country had assured that the games "would be accessible to all fans - regardless of age and gender," said the FIVB.

Stadium ban as an example to draw attention to grievances 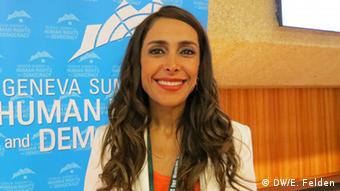 From Belgium, Darya Safai is fighting for more women's rights in Iran

The exclusion from sporting events - for Darya Safai it is just a small piece of the puzzle that fits seamlessly into the overall picture. She is convinced that if you ban women from the stadiums, you virtually exclude them from society. But the fact that the topic received international attention through the reports about the volleyball events is also an opportunity from their point of view. "Fortunately, this will set an example for the entire gender debate in Iran. The women in Iran are no longer willing to accept gender discrimination. And I hope that, with the support of the international community, they will succeed in their cause."

But the reality in Iran is still very different. "For example, the wearing of the hijab [headscarf, veil, editor's note] is actually mandatory. A woman automatically loses custody of her children in a divorce if the man wants them. And in 2012 there were three dozen Universities in the country announced that they would ban nearly 80 courses for women in the future. " Some subjects are simply not suitable for the female nature, it was said at the time to justify the Ministry of Science. Engineering courses in particular are affected, but also linguistics or business courses. 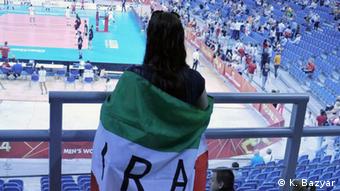 In 2012, the football stadium ban was extended - since then women are no longer allowed to watch men's volleyball games

Discrimination begins in childhood, girls as early as nine can be forcibly married and are punishable by law. "You can even be sentenced to death by a court under Iranian law," explains Darya Safai. It was only in January that the human rights organization Amnesty International published a report on the death penalty. In it, AI denounces that the Iranian leadership adheres to laws that also allow the execution of children and young people. For boys, however, the minimum age for the death penalty is six years higher than for girls. According to the Amnesty report, at least 73 minors were executed in Iran between 2005 and 2015 - even after President Hassan Rouhani took office in the summer of 2013.

At that time, Rouhani succeeded the hardliner Mahmoud Ahmadinedchad. After the election, many hopes were linked to him, also with regard to the human rights situation in the country. Darya Safai, however, was always skeptical whether he would meet the high expectations. "Right from the start I didn't think he was a reformer. He never said that himself. He says that he stands by the values ​​of the Iranian Revolution." Rather, Rouhani has been made into something by foreign countries and the media that he is not at all. But even an avowed reformer in the presidential chair would have little chance of changing much, in their view. "In Iran it is not the president who makes the decisions, but ultimately the chief legal scholar, Ali Khamenei. He decides what is good for the country and the people and what is not. Even the most cosmopolitan president would have his hands tied." 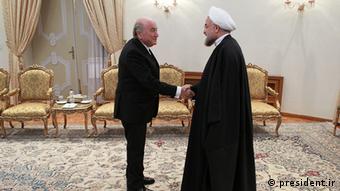 FIFA President Blatter had already visited Iran in November 2013 and, according to his own account, raised the issue of stadium bans for women at a meeting with President Rouhani

"What do you think you have done the women in the country good so far?" She would like to ask this question to Rouhani personally. A little over a year ago she proved that she is not afraid of big names or high positions. Darya Safai wrote a letter to FIFA President Sepp Blatter, in which she appealed to him to speak out against the ban on women in football stadiums. The letter was signed by over 200 Iranian scientists, activists and artists, including Nobel Peace Prize laureate Shirin Ebadi. In fact, Blatter then turned to the Iranian President, but to no avail.

Despite everything, Darya Safai does not allow herself to be discouraged. She wants to continue fighting for women's rights in Iran. And firmly believe that it will be worth it. "I think one day something will change. I am and will remain optimistic."