Who composed the music for the Wii Shop Channel 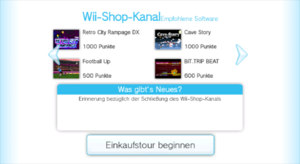 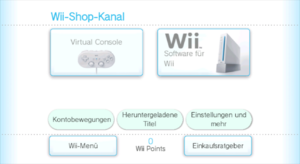 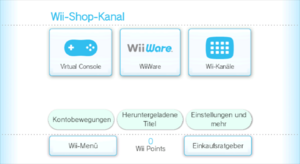 The Wii Shop Channel is a game download channel and channels for the Wii. The channel launched simultaneously worldwide on December 10, 2006 and is also available in Wii mode on the Wii U. At the end of September 2017, Nintendo announced the closure of the Wii Shop Channel in 2019.[1] As of January 31, 2019, it is no longer possible to purchase new software. Software that has already been downloaded can still be downloaded.

In the Wii Shop Channel, both old classics for older systems ("Virtual Console"), such as Super Mario 64, as well as unique games that were only available in the Wii Shop (known as "WiiWare") could be downloaded. Additional channels such as YouTube, the opinion channel and the photo channel 1.1 update were also available. The credit could be topped up until March 26, 2018 with a Nintendo Wii Points Card (later Nintendo eShop Card) or a credit card (VISA and MasterCard), whereby € 1 was equivalent to 100 Wii Points. Content can also be downloaded directly to an SD card. New games were always added on Fridays, and no new content has been put online since 2012.

The development process of the Wii Shop Channel started very early, as this was Nintendo's first real attempt at digital distribution of games. Originally, the development team involved in the Wii Menu was supposed to design the Wii Shop Channel, but they were already too busy with the Wii Menu. Shigeru Miyamoto ultimately selected Haruhana from Nintendo EAD as designer, as none of the other projects could be dispensed with. The director Mizuki looked at numerous shop websites for the design, but they were all too crowded for him, so he commissioned a simpler design. Developing the design proved difficult as the data first had to be sent to the US, where it was then uploaded to the servers. Due to the time difference, the new design was usually only visible the next day.

The Wii Points were developed because Nintendo had problems with the legal situation in the different countries. In addition, many rating symbols and legal notices had to be studied and incorporated, ultimately the goal was to be able to read everything on a 15-inch monitor without any problems.

The demo version was still operated with the GameCube controller; the switch to the Wii Remote proved difficult for the development team. The background music was composed by Totaka (incorrectly written as "Totake" in the interview) and was added because music is playing in a shop and the users should feel like they are in a real shop. In order to increase the fun factor, an animation was added when downloading, in which Mario hits a block after 33% and hits the last block several times from 99% to 100%, a collected coin also stands for 1%. 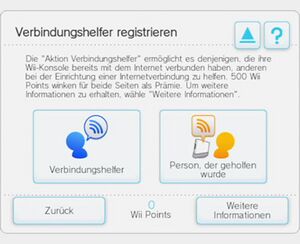 In 2009, the "action connection helpers" started, in which Wii users were rewarded for helping other players to set up an Internet connection. To do this, both had to register their Wii Code in the Wii Shop Channel, whereby the person to be helped was not allowed to be online for longer than 30 days. Both received 500 Wii points each. If 10 people were helped, gold status was awarded and all NES Virtual Console games were received for free. Platinum status was awarded to 20 people and all NES, SNES and N64 VC games were received for free.

On September 29, 2017, Nintendo announced the closure of the Wii Shop Channel.[1] The exact schedule is:

The Legend of Zelda: Skyward Sword saved data update channel and the Wii U transfer software can no longer be used. The two (or three channels) are still available for download, even for customers who have never downloaded them. Wii download tickets are still redeemable. 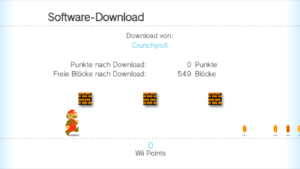 Active download - one coin stands for one percent, each jumped block for 33%

This song plays on the Wii Shop Channel.