How do you pick a good coconut?

Coconuts are popular; awaken the exotic fruits but summer and vacation feelings. However, some coconuts turned out to be culinary cruelty during the investigation and thus spoiled the good mood. Over 70% of the 17 samples contained inedible coconuts.

Coconuts are the fruit of the Cocos nucifera palm. Coconuts can weigh up to 2.5 kg. They reach their full size after half a year and are only really mature after a year. Coconuts consist of an epidermis that is surrounded by a thick layer of fibers. This is followed by a stone bowl that surrounds the seed and is separated from it by a brown seed bowl. The core of the coconut is lined with the white pulp, 1 to 2 cm thick.

The dried core meat is called copra. The copra is used as a raw material for the production of coconut oil and coconut fat. In the cavity of the coconut there is up to 1 liter of sweet, almost clear liquid called coconut water. This is germ-free as long as the nut remains closed and contains almost no fat. The amount of coconut water it contains can be used to estimate how long a nut has been stored. The fresher the nut, the more coconut water there is in it.

Due to the high rate of complaints in previous years, the Chemical and Veterinary Investigation Office Sigmaringen also checked coconuts from retailers in 2018. A total of 17 samples were examined. For the most representative sample possible, the lower food control authorities have randomly selected and removed several coconuts per sample - at least 3, however. All in all, there were finally 52 coconuts that were examined and assessed as part of this priority program.
As a result, a total of 12 samples (= 71%) were objectionable because at least one of the coconuts submitted as a sample showed significant deficiencies. After all, 33% of all coconuts presented (17 of 52) were no longer fit for consumption. Two coconuts were only partially marketable. 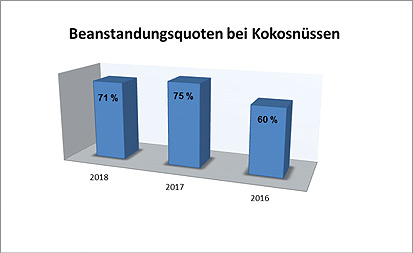 For the quality check, the external condition (shell of the coconut) was first checked for damage, bruises and changes. The coconuts were then opened to examine the inside (coconut pulp, coconut water). Every third coconut was spoiled and inedible:
For example, the coconut pulp was often moldy, either in a few places or as a whole. 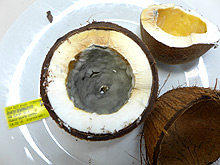 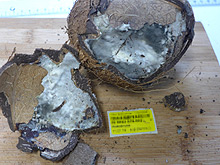 In many cases the brown seed skin between the shell and the coconut pulp showed signs of disintegration. 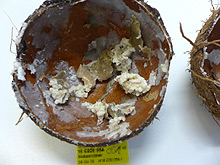 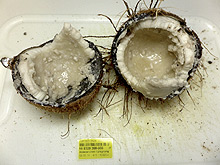 The coconut pulp was slimy or greasy. The perfume fragrance typical of spoilage of coconut oil could also be perceived very clearly. 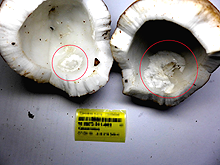 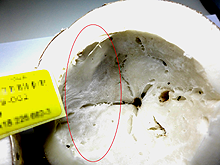 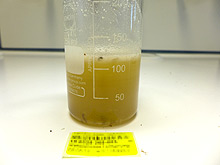 The originally clear and almost odorless coconut water was sometimes cloudy and smelled foul or soapy.

With every coconut that showed damage and / or changes to the shell (e.g. stains, smell, coconut water content), signs of spoilage could also be found inside. From the point of view of food monitoring, coconuts in the display must therefore be checked regularly and taken out of sale in the event of any external abnormalities. This is the only way to ensure that no quality degraded or even spoiled goods reach customers. 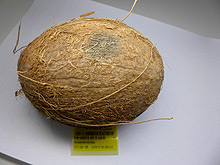 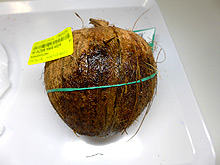 The investigations will continue in 2019.

Indonesia, the Philippines and India are among the most important coconut-producing countries, but coconut palms are also cultivated in Aftrica and South America. Various products are made from the fruit, for example:

It is often difficult for the consumer to determine whether a coconut is still okay, as it is usually only when you open it that you can tell its condition. External changes such as soft or moist areas or beige-gray discoloration on the nutshell are indicators of spoilage. If the shells are moldy or damaged, the coconut should not be eaten as a precaution. Despite the firm shell, microorganisms can penetrate inside. This can cause the coconut water to become cloudy, discolored, slime-like precipitates and changes in the smell and taste (musty, putrid, soapy) of the liquid and coconut pulp.
The so-called shake test only serves as a rough indication of the freshness. If the coconut sounds like it is full of liquid when you shake it, it should be fresh. However, you can only determine the freshness by opening the fruit.
Older coconuts dry out inside, until at some point they no longer contain coconut water. Such a fruit, including the rest of the coconut water, often tastes soapy and is therefore inedible. The fruit is no longer suitable for consumption. If the inside smells rancid, the coconut is spoiled, even if there is still a lot of liquid.