How does night vision work

Night vision devices: Everything you need to know about the technology and functionality of the light-based devices is summarized for you

This basic sketch by IEA-Mil-Optics explains the structure and function of an optical system that intensifies residual light.

As is well known, light can only be focused with optical components (lenses), but at the same time it can only be weakened and not strengthened. So we have to look for another way that can be offered with the help of electronics. Night vision devices thus consist of components of the optics for the imaging and components of the electronics for the amplifying influence on the image. Such devices are therefore also referred to as optoelectronic, or in short: optronic devices. The ability to convert light into electrons based on the photoelectric effect is decisive for the influence of electronics. In short, when a light quantum hits certain materials, it can knock an electron out of this material, which can then be processed further. The structure of a night vision device therefore consists of the optical components lens and eyepiece as well as an electronic component: the picture tube. The lens collects as much light as possible, images it and thus illuminates the picture tube. As usual, the optics also have the option of focusing for different distances. Because night vision devices primarily work in the IR range, the lenses must also be particularly suitable for this spectrum. Conventional optics also have a certain IR permeability, but special optics with increased IR transmission are used here. The picture tube converts the incident light into an electron image and displays this in turn on a screen that can be viewed conventionally with an eyepiece. There are eyepieces as monocular or binocular designs, whereby with binocular devices 2 eyepieces after an image splitter can look at only one tube screen. Devices with 2 tubes deliver a stereoscopic image and thus allow spatial vision. The night vision device serves as "auxiliary glasses" so to speak for the lack of ability of the eye by collecting the radiation of low light, electronically converting it, amplifying it and emitting it again as light in the visible range.

Technology of the image converter tubes in night vision devices

The sketch shows the structure and the individual components of an image intensifier tube in a night vision device in a simplified manner.

The principle of the various electronic image converter tubes is similar: The image of the lens hits a surface that is provided with a correspondingly sensitive chemical coating, called a photocathode. Alkali metals are used for this because of their low energy requirement for the generation of electrons from light and the spectral bandwidth. This is followed by electronic amplifier stages and finally the stream of electrons hits the anode, i.e. the screen, which then lights up when the electrons hit and shows the visible image. This is where the amplification of light via electron image comes in, which has been continuously improved over the various generations of picture tubes and will now be described.

Night vision devices of the so-called "Zero Generation" cannot yet be called an image intensifier. They more or less convert the incident IR light into a visible image and, due to the lack of image intensification, require IR lighting. This generally has the disadvantage that a powerful power supply has to be carried along, which limits the duration of use. In addition, such an IR source can be located, which can be fatal in the military sector. The development of devices of the 0th generation goes back to the 1930s.

The structure of 1st generation tubes basically corresponds to that of those of the 0th generation. With the introduction of newer photocathode coatings (from the mid-1950s) the tubes became more sensitive to light. To further improve the brightness, several levels were switched one after the other, but this also increased image errors.

The transition to the 2nd generation the image intensifier tubes. In the 1960s this leap was made possible by the development of the so-called microchannel plate (MCP, micro channel plate).

The graphic on the left shows the cascading effect of electrons hitting the microchannels.

The difference to the previous image converter tubes is that the electrons were not only accelerated and thus experienced a (still very low) gain, but that the principle of electron multiplication was also introduced here. Electrons hit a suitable material and, due to their energy, knock several more electrons out of the surface. The electrons released in this way then in turn continue this effect, so that one speaks of cascading. The whole thing leads to a multiplication by a factor of 100 to 1,000. A separate light source is therefore no longer absolutely necessary. The microchannel plate has a large number (approx. 2 million) parallel microtubes that are positioned so that the electron beam can hit the inside and thus the coating and trigger the effect described. The image is then passed on with a fiber optic bundle, focused and erected. The resolution of the image is naturally determined by the number of microchannels per area. 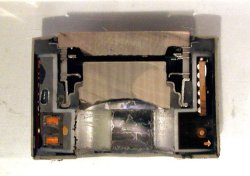 Section through a 3rd generation MX-10130 photocathode tube from US manufacturer Exelis.

These 2nd generation devices are therefore the first so-called residual light brighteners, which can intensify the light that is still present in the area at night and make it visible. The residual light can come from natural light sources such as stars, but also from artificial sources such as residential lighting, car headlights and their reflections on the cloud layer. In comparison, one calculates with about 0.25 lux for a full moon, 0.02 lux for a half moon, 0.001 lux for a starry sky and finally a power of ten less (0.0001 lux) for a new moon and a cloudy sky. In the last situation, brighteners, now made using laser technology, help.

The tubes of the 2nd generation have been continuously developed and are therefore still usable and in use today. For example, the number of microchannels in the MCP has been increased to up to ten million, thereby increasing the resolution enormously. In addition, the sensitive area could be shifted further into the far infrared. At the same time, the signal-to-noise ratio has also been improved. These tubes are therefore also called Gen 2+. 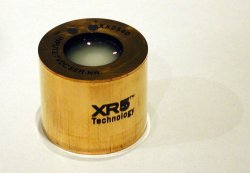 Modern autogating image intensifier tubes such as the XR5 from Photonis are less sensitive to daylight.

In the meantime, the designers arrived at the 3rd generation at. The first step towards improving performance is the photocathode and its quantum yield. They were able to decisively improve the emissivity of the photocathode through a novel coating with gallium arsenide (GaAs). However, this advantage was bought at the price that bright spots, so-called halos, are now created around light sources. Such Gen 3 tubes were already used militarily in 1991 in the Gulf War.

Since then, the further development of the new technology has of course progressed continuously. Above all, the ion protection layer should be mentioned here: Inside the tube, the electrons and the inhomogeneous electric field of the acceleration voltage also create (positive) ions, which are accelerated in the opposite direction to the (negatively charged) electrons and thus hit the photocathode and gradually destroy it. Therefore, a protective layer (ion barrier) was applied to protect the increasingly powerful, but also more sensitive cathodes. In return, however, this barrier also hinders the emission of electrons. Compared to the tubes of the Gen 2+, the main advantage of the Gen 3 variants is that they can also be used in scenarios with very little light.