Gretchen Wilson: Ready To Get Rowdy

The year is 2005. A year before the blonde trio Underwood, Swift & Lambert appeared on the scene and should split the female country among themselves, a die-hard rock lady was in the spotlight: Gretchen Wilson had won a number of awards with her debut single "Redneck Woman" and within a few weeks had conquered the top of the country charts. With her robust, self-confident demeanor, the former waitress from Illinois shook the dust out of the clothes of the frozen female scene in no time at all. Celebrated as the savior of the genre, the five-time platinum album "Here For The Party", co-produced by John Rich, made history.

But success stories cannot be repeated indefinitely. The first signs of wear and tear were already showing on the quickly reproduced second album "All Jacked Up". The redneck style seemed overused and the audience turned back to the ladylike interpreters. The men had their terrain back and Gretchen Wilson had disappeared from the hit lists in early 2006.

In the years that followed, the lady with the girlish skirt tube devoted herself to her private life. There were isolated comeback attempts, most recently in 2013 with the triple release of a country, rock and Christmas album. Today, 13 years after the great debut success, the now 44-year-old singer-songwriter is back and is broadcasting with the album title Ready to get rowdy Signals that remind us of their heyday. “This album is meant to make you feel like good old country music isn't lost. “Gretchen Wilson” is pure in these 12 songs. The “Redneck” is back ”, so the promising words of the artist herself. It is now time to find out how much musical truth there is in these words.

Indeed, Ready To Get Rowdy offers more than mere promises. We hear a powerful, musically varied and stylish country album by a singer whose style of interpretation has lost none of its freshness over the years. Independent producer Blake Chancey, known to insiders from his collaboration with Waylon Jennings and the Dixie Chicks, has succeeded in reviving Wilson's redneck spirit with great instrumentation and groovy grooves.

Even the opener “Stacy”, a hearty country rocker about a “crazy girl” before the boys run away, exudes the amount of boldness that current country pop hits are going on. The second song "Salt Mines" turns out to be a real songwriting pearl. Embedded in a relaxed Waltz rhythm, the hard life of a salt miner is depicted, whose wife, frustrated by everyday life, shelves the thought of a separation due to sexual addiction. This kind of real-life poetry is miles away from the otherwise mundane New Country theme world. "Summertime Town" can convince with its harp-supported Heartland flair as a radio single. It is to be hoped that the airplay stations will put their ignorance aside and give this infectious tune a chance.

That Gretchen Wilson still cultivates her love for 80s rock, she proves on the energetic title track, which is followed by “Whiskey And My Bible”, a ballad of confessors interpreted with strong emotion. Kid Rock, Wilson's old buddy from MuzikMafia times, comes into its own as a duet partner on the bluesy “Bad Feeling”.

After the relaxed mid-tempo break-up song “Letting Go Of Hanging On”, Wilson switches to country mode in the second half of the album with a fat steel accompaniment. "I Ain't That Desperate Yet", the toe-rocking honkytonker "A Little Loretta" or the bluegrassed barn cracker "Big Wood Deck" prove that the lady from the small town of Pocahontas learned her craft from scratch.

On the bittersweet ballad "Mary Kay and Maybelline", the removal of make-up from everyday worries is interpreted in an outstanding manner to maintain the appearance. With the hit “Hard Earned Money”, Gretchen Wilson delivers further proof of the liberating effect of a melodically convincing working class song. After 41 minutes of play there is no doubt: Gretchen Wilson kept her word. The jump from the “redneck” to the “rowdy” was a success across the board.

Conclusion: It is already thought-provoking when, in times of meaningless crossover productions, a characterful, stylish and entertaining country album is ignored by large parts of the scene. For us one more reason to recommend “Ready To Get Rowdy” to Country.de readers as one of the top releases of the year.

Gretchen Wilson - Ready To Get Rowdy: The Album 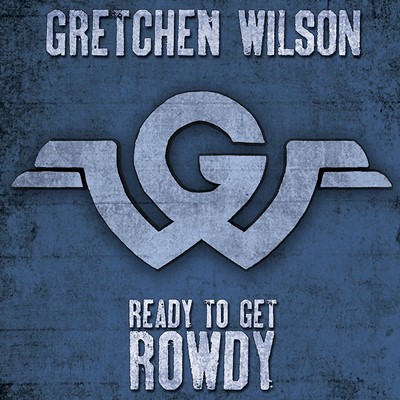