Why don't you put asphalt on bridges

Road surfaces on bridges have to do a lot. They have to absorb the stresses of traffic, pass them on to the structure and remain resistant to deformation, flat and with good grip. At the same time, they have to seal the bridge structure against surface water, which in winter contains de-icing salt that promotes carbonation or corrosion. The BASt plays a key role in the development and quality assurance of the coverings with investigations and the creation of regulations. 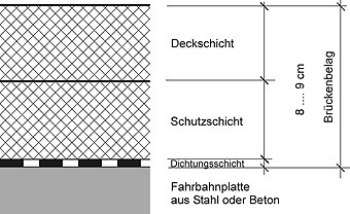 The eight to nine centimeters thick bridge pavement consists of a top layer, a protective layer and a sealing layer. The protective and surface layers are made of asphalt. Only tested building materials may be used for the sealing layer made of different materials.

The most common type of construction is a sealing layer, which consists of a single-layer bitumen welding membrane. It can be flamed with a special gas burner. In the second type, the bitumen sheeting has two layers. The sealing layer of the third type consists of a liquid two-component reaction resin, usually polyurethane. 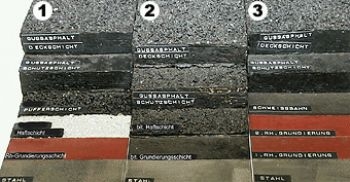 In contrast to the road surfaces on concrete bridges, surfaces on steel bridges are exposed to large deformations due to the elastic behavior of the steel road plates. For this reason, a dynamic load test was developed: the fatigue limit bending test. In this test, the dynamic loads on a bridge covering are simulated over its service life.

A special feature of steel bridges are the movable bridges, such as lifting and bascule bridges, as well as the temporary bridges. With these bridges, asphalt pavements can normally no longer be used, as weight reduction is of decisive importance for them. The reactive resin-bonded thin coverings were developed for this application. They consist of a reaction resin primer layer and a six to ten millimeter thick reaction resin coating.