Marseille has a metro system

Subways in France: the subway in Marseille

Marseille is one of the oldest cities in France. It was built over 2500 years ago, and is the capital of the Bouches-du-Rhône department in the Provence-Alpes-Côte d’Azur region. With 900,000 inhabitants, Marseille is the second largest city in France, and the airport is that Aéroport Marseille Provence.

The metro in Marseille opened on November 26, 1977, with metro line 1. The Saint Charles and La Rose-Technopole de Chateau-Gombert metro stations were two of the first to go into operation. On March 11, 1978, the underground line 1 was extended with the Castellane station.

Metro line 1 was expanded to include La Timone station on September 5, 1992, and La Fourragère station was the last to be built. This was put into operation on May 5, 2010.

The metro network in Marseille consists of two metro lines and 28 metro stations. The lines are known as Line 1 and Line 2. The following are the stations for each of the subway lines:

Below are some interesting facts about some of the subway stations:

The Marseille metro is connected to the tram, the TER Provence-Alpes-Cote d’Azur (TER PACA) regional train, buses, ferries and ferries from Navette Maritime de Marseille. The available connections at the stations are as follows: 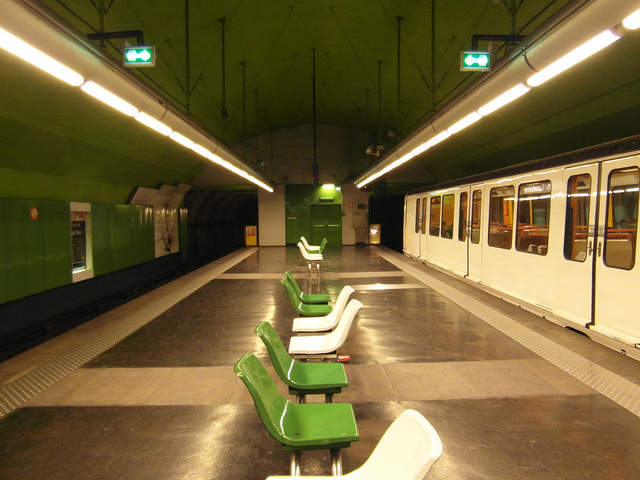 The nearest metro station to reach the Aéroport Marseille Provence airport is Saint Charles. To get to this subway station from the airport, you have to get on the bus towards Navette Aeroport - Gare Saint Charles. The ticket costs € 8.50 and the journey takes about 30 minutes. This bus runs every 20 minutes.

2) Opening times: The following are the opening times from Monday to Friday of each subway station:

The prices are shown in euros.

- Tickets (occasional journeys): these are divided as follows:

Note: The description of the season tickets, Le Pass XL Permanent, is shown below:

The subway driver can refuse entry to the train for a passenger with a stroller. Strollers are not allowed at all underground stations.

a) With the XL season ticket: with this ticket the parking service is free of charge. A trip into the city by bus, BHNS, subway or tram must be made to use the parking lot. After the return trip, stay up to 2 hours to pick up the car from the parking lot

b) Without XL season ticket, with Card Transpass: The parking service is only chargeable with the Transpass card. The fee will be deducted from the Transpass card. If the car is only parked for 10 minutes, it is free of charge. It is not possible to park the car for more than 24 hours. The fees are as follows:

The operator of the metro, Régie des transports de Marseille, offers bike rental. In order to be able to rent a bike, the Transpass card or the XL time card is required again. In addition, an account must be created on the operator's website (www.rtm.fr). After logging in, you have to click on a link on the website to add yourself to the bike map. Then accept the terms and conditions, and finally pay the fee of € 1 via bank or credit card.

The bikes can be used at any time of the day. Use is even free of charge for the first 30 minutes. After that, each hour costs: € 0.50. In order to get a bicycle out of the bicycle station, the Transpass card or the XL time card is required again. One of the two cards must be swiped through the existing reader.

The operator, Régie des transports de Marseille, plans to expand metro line 1 to allow travel between the Bonneveine and Rond-Point du Prado areas. The expansion and the construction of a new metro station called Gèze should be completed by 2018.

Metro line 2 will also be expanded to allow travel between the Saint-Marcel and Saint-Loup areas. In order to achieve this, about 4km of rail line will be added. This expansion should be ready by 2025.

Finally, it should be mentioned that the entire rail line of the subway will be doubled and should be ready by 2023.

The Saint Charles underground station will be our starting point. The sights that are close to this station are as follows:

1) Vieux Port: The journey time is 10 minutes. At the Saint Charles metro station, take line 1 towards La Rose-La Fourragère, and get off after 5 minutes at the Vieux Port stop.

2) Notre-Dame de la Garde Basilica: The journey time is 20 minutes. At the Saint Charles metro station, take line 1 in the direction of La Rose-La Fourragère, and get off after 5 minutes at the Vieux Port stop. Then walk towards Vieux Port (old port), and at the bus stop you get on bus 81 towards Le Pharo. After 5 minutes get off at the Place la Corderie stop and walk about 760 meters to Rue Fort du Sanctuaire.

3) Museé des Civilizations de l’Europe et de la Mediterranée (MuCEM) (Museum of the Civilizations of Europe and the Mediterranean): The journey time is 15 minutes. At the Saint Charles metro station, take line 1 towards La Fourragère, and get off after 5 minutes at the Vieux Port stop. Walk towards Vieux Port (old port) and get on the bus 82 S towards Gare Saint Charles at the bus stop. Get off after 5 minutes at the La Major stop and walk about 400m in the direction of Promenade Robert Laffont 7.

4) Saint-Victor Basilica: The journey time is 15 minutes. At the Saint Charles metro station, take line 1 towards La Fourragère, and get off after 5 minutes at the Vieux Port stop.Walk towards Vieux Port (old port, Cours Jean Ballard) and get on the bus 81 towards Le Pharo at the bus stop. After 5 minutes get off at the Saint Victor stop and walk to 3 rue de l’Abbaye, where the basilica is located.

5) Cathédrale de la Mayor: The journey time is 15 minutes. At the Saint Charles underground station, take line 2 towards Bougainville and get off after 5 minutes at the Joliette stop. Finally, walk to the Place de la Major, where the cathedral is located.