How does a vacuum transistor work

The increasing miniaturization of silicon structures in chip development creates more and more problems. A technology that was long believed to have been overcome could now experience a rebirth: the old vacuum tube. In a different form - of course.
Infographic: Chip Development 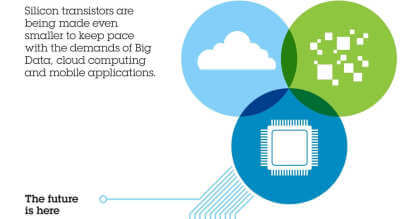 Chip production will soon advance to dimensions in which transistors are smaller than 10 nanometers. It is already difficult to get a grip on the side effects of miniaturization. New phenomena then appear below 10 nanometers. The silicon is behaving increasingly strangely. Not only do leakage currents occur, but the structures become increasingly elastic and begin to emit light.

The California Institute of Technology (CalTech) has therefore dug out the concept of the vacuum tube again and wants to bring it back into use in a very much reduced form. "The vacuum tube reappears every decade," said Axel Scherer, head of the Nanofabrication Group at CalTech, according to a report in the New York Times. In the 1990s, for example, they were a promising option for the development of flat displays - but liquid crystals then turned out to be more efficient and cheaper to produce. Similar things also happened several times in other research projects.

Now the vacuum tubes are on the agenda again and could actually represent a sensible alternative. However, they no longer have anything to do with the familiar glowing glass bulbs in old radios. Instead, they are metallic tubes that can only be seen under an electron microscope. The researchers at CalTech have already used them to design functioning components.

An unwanted effect is suddenly needed

With a comparable size, they have a significant advantage over silicon structures: Currently, around half of the energy put into a processor disappears in the form of leakage currents and is released into the environment as waste heat. This is caused by the quantum mechanical tunnel effect - and it is precisely this that would ensure that switching operations can be carried out in the new vacuum tubes without the loss of electrons. The research results so far are very promising in that it can be used to develop chips that work faster than silicon circuits and still require significantly less energy.

One also has alternative materials in mind. The extremely thin tubes made of metal could also be replaced by carbon nanotubes. Their development has been the focus of much work for a long time and is accordingly well advanced.