The Yad Vashem Memorial and Research Center showed historically incorrect videos at a forum on January 23. She now admits that. 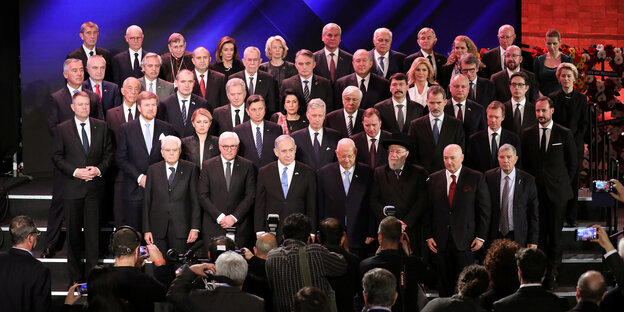 WARSAWtaz | “The Yad Vashem memorial apologizes for errors and distortions at the Holocaust Forum in Israel,” headlines the left-liberal daily Gazeta Wyborcza in Poland. Other Polish media also report prominently about the apology from Jerusalem.

Because it is more than unusual. Yad Vashem aims to set standards worldwide as a Holocaust research and memorial center. But at the fifth World Holocaust Forum on January 23, to which the European Jewish Congress, Yad Vashem and Israel's President Reuven Rivlin had invited, several mishaps occurred.

On the one hand, the memorial had completely unnecessarily entered into a competitive dispute with the Polish Auschwitz-Birkenau memorial, which, as every year, had invited to the commemoration of the liberation of the Nazi German concentration and extermination camp by the Red Army on January 27th.

On the other hand, Yad Vashem did not oppose the appropriation of the commemoration by Russian President Vladimir Putin, so that in the end the historical message that was sent from Yad Vashem to the whole world was wrong.

For Poland, the Israeli Yad Vashem Memorial and Research Center's way of dealing with its own mistakes is particularly interesting, as historical mistakes or exaggerated myths occur again and again in Poland and it is difficult to withdraw from them.

Yad Vashem is showing how it can be done these days: After internal consultations, Professor Dan Michman, director of the International Research Institute Yad Vashem, sent a letter to the left-liberal daily Haaretz. The latter had previously strongly criticized Yad Vashem for legitimizing the instrumentalization of history by Vladimir Putin instead of being on the side of the truth.

In the letter, Yad Vashem confesses to having shown historically false videos on the memorial day on January 23, which unfortunately numerous state guests, Holocaust survivors and millions of television viewers had seen.

In the videos, the letter says, "neither the division of Poland by Soviet Russia and Nazi Germany in 1939 nor the Nazi occupation of Western Europe in 1940" can be seen. In addition, Yad Vashem added that there were gross errors in the historical maps. In particular, the borders of Poland were completely misrepresented, as if the occupation of eastern Poland by the Soviet Union had not existed from 1939 to 1941. Concentration camps were also confused with extermination camps.

"We apologize for the very unfortunate incident," says the letter. "These videos do not represent the state of research by Yad Vashem." As an institution, the memorial has a duty to Israel and the Jewish people to adhere to the historical facts established through research.

At the same time, it must oppose attempts to mislead and distort history in other countries. But this also means that Yad Vashem has to admit his own mistakes and inaccuracies to himself, make them public and correct them and apologize for them.

In Poland this letter causes astonishment, but also satisfaction. Because just over two weeks ago, most Poles felt quite alone when the obviously Russian-inspired history videos flickered across the screen in Jerusalem without much protest from other countries.

Weeks earlier, Putin had started a historical dispute with which he wanted to relativize the significance of the Hitler-Stalin pact and in return blame Poland for the outbreak of World War II. Putin called the Polish pre-war ambassador in Berlin Jozef Lipski an "anti-Semitic bastard". Putin also denied that Poland's partisans and soldiers also contributed to the victory over Hitler.